Bole preparatory school is one of the highest ranking and largest staff sizes of schools in the 300+ government schools system of Addis Ababa Education Bureau. As part of the selected 10 pilot schools, it is also one of the pioneer preparatory schools in the city that took a Thinking Schools Ethiopia training by classifying its staff in two groups. 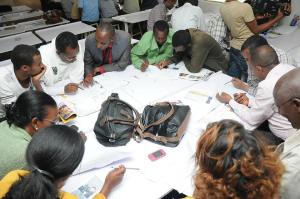 In accord with this understanding a one and half day training, for the first group, was conducted to more than 80 participants of which school teachers, department heads, director and two deputy directors of the school were part of the training.pioneer preparatory schools in the city that took a thinking schools Ethiopia training by classifying its staff in two groups.

Day one, community building exercises, and personal frame of reference has been introduced followed by a brief introduction to the Growing thinking schools inside out guide. The trainees were deeply engaged in discussions and entertain different views while they were working with the five dimensions to thinking (Cognitive process, Enquiry methods, Dispositions, Learning Modalities and creativity). 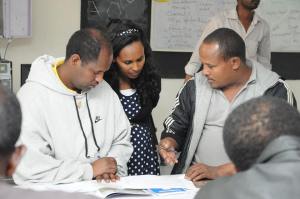 Day two of the training was an introduction to visual tools particularly the use of the 8 thinking maps. Participants   were exposed to see the use of the maps and were also extensively exercised and see the potential of these maps to implement in an actual classroom circumstance.

The overall reflection of the participants was great of our expectation. The school director was highly inspired and wants to conduct training for the second group as soon as possible.

This was a step in the process of implementing a whole school transformational process of creating models of Thinking Schools in the Addis Ababa Education System. It is remembered that the instructional leadership team of Bola high School took part in the first phase of the training conduted in June, 2014. The training was interactive, particpatory, and reflective. The goal of the training was to adequately introduce the educators with Visual Tools:Thinking Processes Maps , and facilitate the exercise of use of thinking maps as tools for conducting actual class room lessons by teachers in all departments /academic streams. Following are still pictures taken from the training.